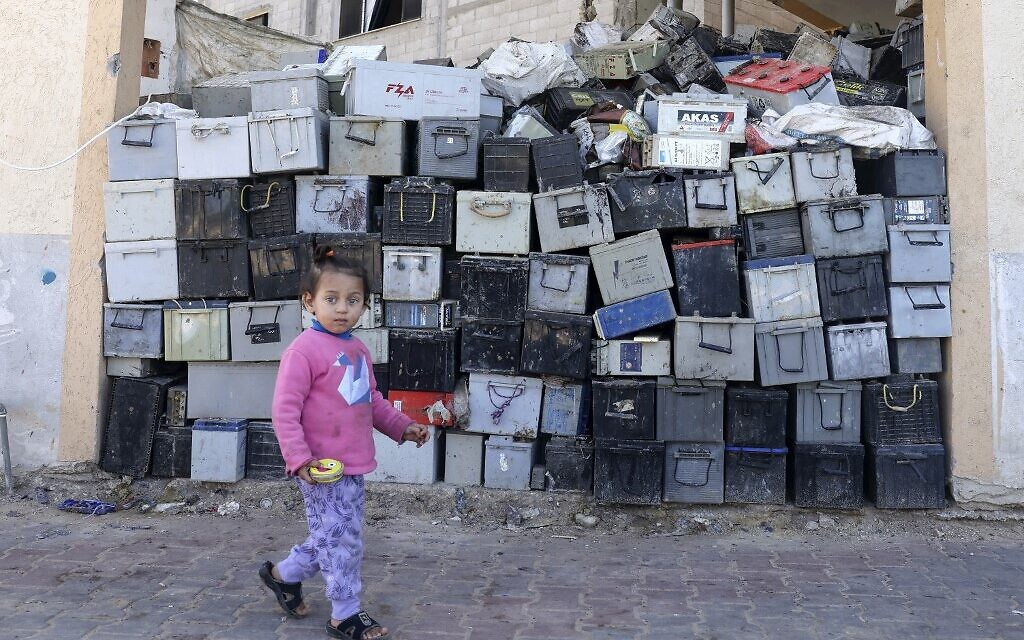 At a landfill in southern Gaza, piles of used batteries pile up, rusting cells that pose a growing health risk to Palestinians in the enclave.

Batteries are an essential power source in Gaza, where public electricity supply is scarce and infrastructure has deteriorated since the beginning of the Israeli-Egyptian blockade of the enclave in 2007, the year the islamist The terrorist group Hamas has taken control. Israel says the blockade is in place to prevent Hamas from arming itself.

“Batteries have been piling up for 15 years,” said Ibrahim Baraka, who works at the 2,000 square meter (half-acre) landfill in Khan Yunis, where residents of surrounding homes can peek for see heaps of lead and mercury. waste that accumulates daily.

Gaza, home to 2.3 million Palestinians, has only one diesel-powered power plant. Fuel deliveries are unreliable, largely due to the blockade. The factory was also bombed by Israeli fighter jets during a conflict with Hamas in 2006.

Mohamed Masleh, director of resources at Gaza’s environment ministry, estimated that there are 25,000 tons of used batteries in Gaza that need to be recycled.

Most of them are on sites that are not suitable for the storage of hazardous materials.

Collecting batteries is also a source of income for the impoverished territory, where the unemployment rate hovers around 50%.

A Palestinian collects used batteries from a donkey cart to sell them for recycling in Khan Yunis, in the southern Gaza Strip, on February 14, 2022. (SAID KHATIB / AFP)

On a chilly morning, Zakaria Abu Sultan rode through the streets of Gaza City with his horse-drawn cart, shouting his mission through a loudspeaker.

“Anyone have damaged batteries to sell? he shouted.

“I wander since dawn to buy damaged batteries. I buy them at best for 50 shekels ($15) and sell them to the junkyard for 70 shekels,” he told AFP.

Typically, damaged cells are taken to landfills, such as the one in Khan Yunis where Baraka works, which dismantles them for materials like plastic which are then sold to factories.

Ahmed Hillis, director of the National Institute for Environment and Development in Gaza, said that while he understood there was a profit in discarded batteries, the trade was extremely dangerous.

“Tons of batteries are piling up in landfills, some of which are over 40 and 50 meters high,” he said.

“Piles are among people and on animal carts children are carrying them,” he told AFP.

“Sometimes we find a father and son trying to open them with a screwdriver. It is a farce and chaos,” he added.

Israel had a role in managing Gaza’s toxic materials, but that ended with the Hamas takeover in 2007.

Hamas is considered a terrorist organization by much of the West, and it has no direct contact with Israel.

A Palestinian collects used batteries to resell them for recycling, at a junkyard in Khan Yunis, in the southern Gaza Strip, on February 14, 2022. (SAID KHATIB / AFP)

Last month, the Israeli Defense Ministry body responsible for civil affairs in the Palestinian territories (COGAT) said a second iron shredder had become operational at the Kerem Shalom crossing between Israel and Gaza.

The improved crushing capacity “will produce a significant increase in scrap metal exports from the Gaza Strip”, COGAT said.

Baraka said it raised hopes for a solution to battery waste, with most agreeing the current situation is not sustainable.

He said battery waste was now handled by people “who don’t follow any rules and have no experience in collecting hazardous materials”.

If so, we have a request.

Every day, our journalists aim to keep you up to date with the most important developments that deserve your attention. Millions of people rely on ToI for fast, fair and free coverage of Israel and the Jewish world.

We care about Israel – and we know you do too. So today we have a question: show your appreciation for our work by join the Times of Israel communityan exclusive group for readers like you who appreciate and financially support our work.

You are a dedicated reader

We’re really glad you read X Articles from The Times of Israel over the past month.

That’s why we started The Times of Israel ten years ago – to provide discerning readers like you with must-read coverage of Israel and the Jewish world.

So now we have a request. Unlike other media, we don’t have a paywall in place. But since the journalism we do is expensive, we invite readers to whom The Times of Israel has become important to support our work by joining The Times of Israel community.

For just $6 a month, you can help support our quality journalism while benefiting from The Times of Israel WITHOUT ADVERTISINGas well as access Exclusive Content only available to members of the Times of Israel community.

Thank you,
David Horovitz, founding editor of The Times of Israel