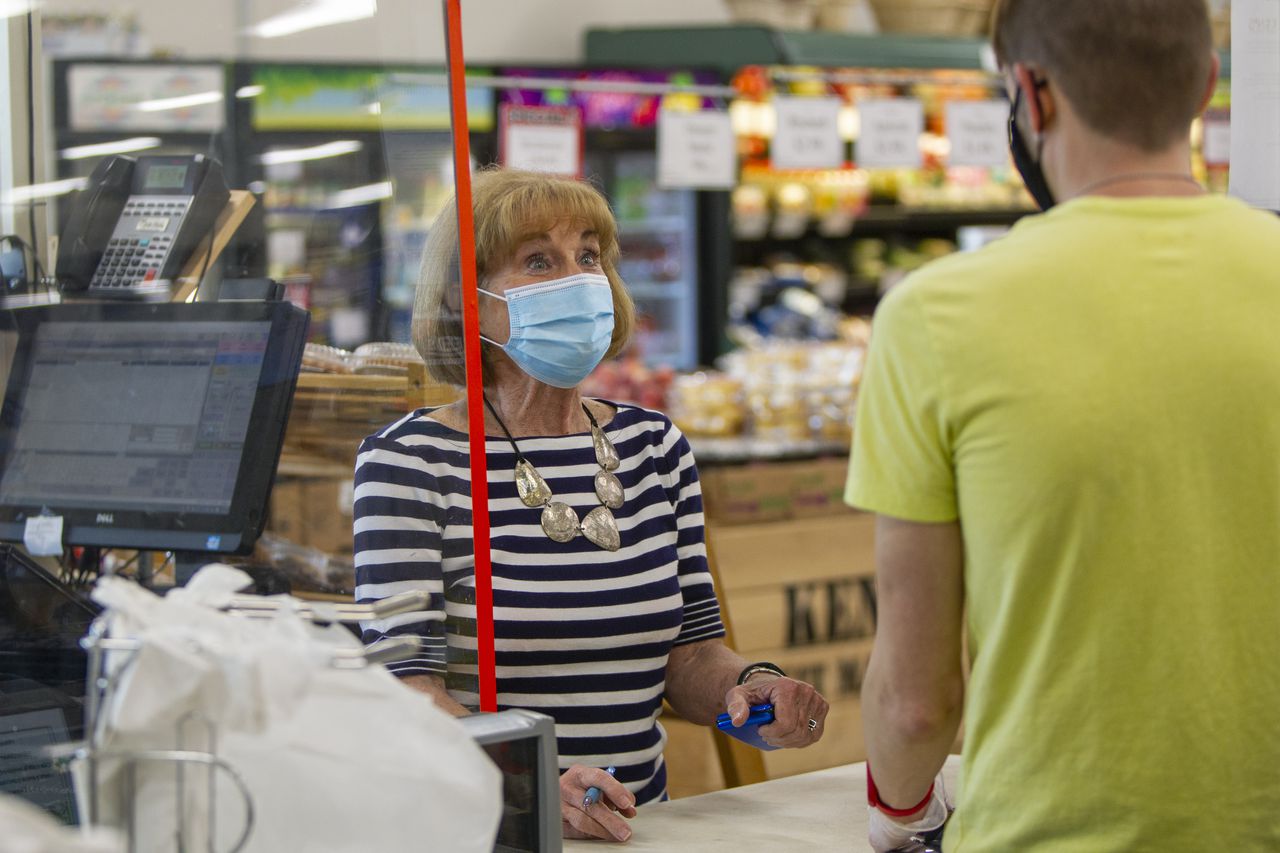 Unemployment has fallen. Employment rates are improving. And Michigan’s economy is on the road to recovery after being battered during the COVID-19 pandemic. But many don’t feel those gains where it matters most: their wallets.

Veronica Kuhl, who worked as a secretary in the Grand Rapids area for three decades, is very concerned about the economy.

“Gasoline prices have just gone up, which affects us all. I don’t think people are getting the raises they should to keep us where we need to be. I think a lot of businesses have rebounded, but there are still so many people who need help,” she said.

As people feel the pinch of inflation at the gas pump and the grocery store, experts say Michigan’s economy has made great strides since nearly a quarter of the workforce was unemployed in April 2020.

“The idea that the pandemic wasn’t going to disrupt the economy, that’s just not realistic, is it?” said University of Michigan economic forecaster Dr. Gabe Ehrlich. “It’s just going to take time to get back to where we were. It was a huge economic disruption, and it had lasting effects on the economy.

Michigan has made progress in some areas while others lag behind. Here are four signs of economic recovery.

The labor market is one of the most important parts of the economy, Ehrlich said. It can be measured in multiple ways, but economists usually refer to unemployment to gauge the health of an economy.

“The unemployment rate really asks how many people are looking for work and can’t find one,” Ehrlich said. “It’s a really important measure of how the economy and the job market are working for people.”

Michigan’s unemployment rate soared to 22.7% — far higher than the national average of 14.7% — when COVID first hit two years ago. In January, it fell to 4.9%, slightly above 4% nationally.

The unemployment rate fell in the summer of 2020 and continued to fall last year. Falling below 4% will be a sign that Michigan’s labor market has returned to pre-pandemic levels, Ehrlich said.

Another measure is the number of unemployed per job offer. And in Michigan, there’s just under one unemployed person for every job opening, according to the Bureau of Labor Statistics (BLS).

“It’s a pretty clear sign of a labor market where if people want a job, they can find it. And that’s pretty much a healthy labor market,” said Dr. Steve Woodbury, senior economist at the WE Upjohn Institute for Jobs Research and professor at Michigan State University.

The number of jobs rebounds, despite a labor shortage

The labor market is both the ability to get a job and the types of jobs available, Woodbury said. It is going through a difficult period of aligning employee wishes and employer demands, which also includes skill level and compensation.

Woodbury cites retail and restaurants as an example where there has been a lot of change within an industry. The service industry has embraced pandemic-mandated changes like takeout, delivery, cashless and e-commerce and workers are expected to follow suit.

“There is this mismatch between the skills of workers and the demands of employers, and they feel it,” Woodbury said. “The culture at work has changed dramatically.”

This lends itself to what Ehrlich calls “the story of two labor markets.” There is a disconnect between those looking for a job and those hiring. This is evident with data showing that the unemployment rate is falling as employers struggle to find workers.

Unemployment measures the success of job seekers, but this measure can be skewed by several variables, such as the Woodbury mismatch between employee and employer.

The number one metric that Ehrlich looks at to determine recovery is the number of jobs.

Michigan lost more than a million jobs from February 2020 to April 2020. About 80% of those were regained in December, according to BLS data. The state is on an upward trajectory, with January figures showing nine straight months of job gains.

The state’s job recovery recently grabbed headlines as a Bloomberg opinion piece praised Governor Gretchen Whitmer for leading the pack on the post-pandemic recovery. This analysis placed Michigan first among 37 states with a population over 2 million.

While Ehrlich acknowledges Michigan has had gains, piling up its successes against other states requires nuance.

“Horse racing is tricky between Michigan and the United States,” he said. “We are further from a full recovery than the country is, but we also had a bigger hole to pull out.”

High inflation is the price paid for a quick recovery

While economists point to the labor market as a sign of the economy’s healing, inflation remains the fly in the ointment. Last posting 7.9% year on year, stubbornly high inflation rates are eating away at personal gains in income and savings.

“I can see how this would affect people who live paycheck to paycheck,” said Andrew Eckert, an architect in Grand Rapids. “For the most part just smile and bear it and hope things calm down a bit.”

Consumers should “smile and bear” every week at checkout.

Nationally, bacon now rings up to $7 a pound, a dozen eggs cost about 50 cents more, and potato chips top $5 a bag, according to the Consumer Price Index. The price increases are currently most visible at the gas pump where fuel prices have soared past $4 a gallon.

Wage gains have also been swallowed up by rising prices, with hourly earnings falling 2.6% since February 2021, according to national data.

Ehrlich said the Federal Reserve is targeting inflation of around 2% year-over-year. The best-case scenario would be to improve supply chains this year to see prices slow in 2023.

Will consumers have the patience?

Has life returned to normal?

Beyond data on unemployment, job numbers and inflation rates, unofficial measures such as restaurant reservations and public outings help track whether the economy is returning to normal.

OpenTable, an international restaurant reservation service, has been collecting restaurant visitation data since March 2020 on its State of the Industry website. This shows that restaurant visits took a hit during the omicron wave this winter and have still not stabilized at pre-pandemic levels.

Another tracker is cellphone data, collected by the Google COVID-19 Mobility Report, which shows visits to restaurants, museums, libraries and cinemas are still 13% below the pre-pandemic movement in the world. Michigan. Trips to the grocery store and pharmacy, often considered essential, remain down 14%.

Both metrics demonstrate that life tied to the economy has still not rebounded from the pandemic.

For much of the pandemic, economists pointed to the virus itself as the reason for the turmoil. As the spread of the coronavirus becomes manageable and heads towards endemic status, economists are wondering how the federal government will land this plane.

Ehrlich and Woodbury immediately signal that the Federal Reserve Board is raising interest rates for the first time in three years.

On March 2, Federal Reserve Chairman Jerome Powell told the US House Financial Services Committee that he would support a 0.25% interest rate hike this month. The Fed is looking to slowly raise interest rates without disrupting job growth.

Powell said the Fed was being cautious not to repeat history, referring to the double-dip recession of the early 1980s caused by tightening interest rates too quickly.

“The big question now is ‘Can the Fed actually pull off a soft landing?’ “Woodbury said. “The really, really soft landing that the Fed ever aborted was the recession that we never saw in the mid-90s. I’d be happy with a semi-bounce landing.

At the start of the year, major investment banks forecast five to seven interest rate hikes throughout the year. But that was before Russia invaded Ukraine.

Consumers and economists are wringing their hands as gasoline prices soar above record highs.

The war and the US response have already started to impact day-to-day spending, but Ehrlich doesn’t see it changing the course of post-pandemic recovery.

“It will be a sore point for people,” he said. “But in terms of derailing the recovery here, we don’t expect war to derail the recovery in the United States or Michigan at this time.”

An ideal soft landing would mean interest rates stabilizing around 2% and unemployment around 3-4%, Woodbury said.

Even allowing for the unknown, University of Michigan economists predict the state will be recovered by the second half of 2023.

Recovery is a delicate balance. On the one hand, federal stimulus measures have contributed to high inflation. On the other hand, Ehrlich said this post-pandemic recovery is moving faster than that of the Great Recession, due to the stimulus.

“In a way, the high inflation we’re seeing right now is part of the price we’re paying to get this quick recovery,” he said. “There is a compromise there.”